Three days ago, a female staff member asked Ecarlatte if she would take a newborn infant into Santa Chiara. Ecarlatte said no. The staffer then asked Ecarlatte if she would help her find a home for the 2-day-old infant. Ecarlatte asked her what she was talking about. The woman said she found the baby in the garbage dump behind her shack in Cité Soleil. Ecarlatte said she would take the baby as her own child. The staffer found out who the mother was. Ecarlatte spoke with the police commander who lives near us, and he told her who to see in the government to make it official. Ecarlatte and the staff member are visiting the mother of the child today to get her to sign some paper essentially saying she is giving the infant to Ecarlatte. The mother and Ecarlatte and the staffer will go see the personin the government who will authenticate all this. If needed the police commander will accompany them. The baby is now five days old. He had no name, no papers. Ecarlatte has given him the name Peter Francis. She will raise him as her son. Ecarlatte shared all this with me yesterday during a phone which began with her saying, “I have a baby.”Since the death of her own infant daughter more than 20 years ago, along with her first daughter who died before her second birthday, Ecarlatte has longed for her own baby. While we adopted Bency and Judeline and are raising them as our children, they came to us with a history and mothers who were still around. Bency and Judeline know their birth mothers, but have accepted Ecarlatte as their mother. With Peter Francis, he will know only one mother… Ecarlatte. To be honest, I do not know how I feel about this. There was no way to say no as it seemed already to be a done deal. Ecarlattehas already made plans for who will care for the infant when she is in Florida for her medical tests.The baby is already living at Santa Chiara, sleeping in an unused crib in our bedroom. Here is a photo of Peter Francis that Billy sent yesterday…

Walking in the Book of Nature

While Ecarlatte was busy rescuing a baby left in a garbage dump, I spent an hour late Tuesday afternoon walking a trail in Bear Point, a nature sanctuaryteeming with all kinds of birds and small animals. St. Bernard of Clairvaux’s discoveredheaven in the book of nature.John Muirlistened“to the preaching of pine trees.”I find peace photographingthewonder and beauty of nature.

Over the last 18 years,I’ve taken at least a hundred thousand photographs in some of the worst slums on earth. As an antidote to looking so intensely at so much suffering, I began to use my camera in a therapeutic fashion by focusing on beautiful and tranquil scenes, usually without any people in the frames. The gentle images of quiet spaces served as a calming balm. Slowly I began to see that the landscapes, trees, mountains, lakes and rivers I photographed were living repositories of sacred images and eternal truths. These sacred places –sanctum sanctorum–are sources of inspiration where human consciousness is temporarily set free.Spending time in nature gently leads a person into a deeper appreciation of the importance of checkering his or her life with periods of silence, stillness, and solitude.

Yesterday afternoon, a grandmother from CitéSoleil who seems to be on a mission of rescuing kids brought four kids to Santa Chiara.One boy and three girls ranging in age from 5 to 12. Ecarlatte told the grandmother we are at full capacity and we could not longer accept any additional children. 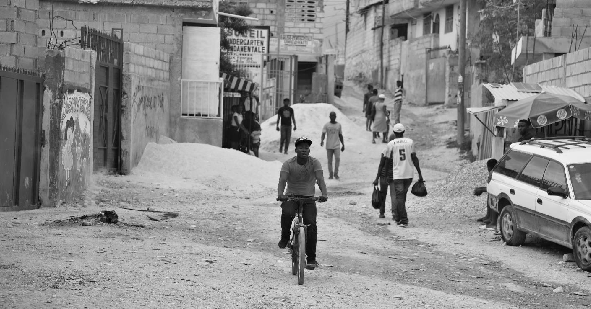