I greatly appreciate the prayers that were offered for my brother Bill in response to yesterday’s Journal. What I failed to mention about my brother was his total dedication to caring for his daughter who had Down’s Syndrome. I am also thankful for the first donation to a fund for the construction of the much-needed girl’s dorm, which came from a monthly donor from Michigan.

Yesterday morning I was also grateful to wake up and find we had electrical power and running water, two blessings to which I never gave much thought to before living in Haiti. I used to take for granted things which people living in harsh poverty never experience. To see a young child or an old person struggling to haul buckets of water to their shacks deeply saddens me. I can’t imagine myself lugging a heavy bucket of water in order to flush a toilet or to shave. I want to thank all our faithful monthly donors for making sure our kids have electricity to light up the night and water to wash themselves and to quench their thirst during the heat of the day.

Yesterday morning, just before Mass was to begin, the sisters were all kneeling or sitting in their places on the floor, when suddenly the power went out and the chapel was caste into darkness. Within seconds, someone somehow restored the power. What was interesting was that the sisters never moved. They remained focused on their silent meditation. Just before the consecration, power once again was lost. After a few moments, one of the sisters got up and left the chapel. She quickly did something and power was restored.

During Mass I thought about how the 45 minutes I spend with the sisters early each morning has been a calming influence on me. (After Mass the sisters recite a number of prayers for about 10 minutes before leaving the chapel.) They are like the calm at the center of a hurricane. All around them there is a swirling chaos and unrelenting agony. Yet, they have an inner stillness that comes from their complete dedication to God. Just as it is important to faithfully use the nebulizer and take my medication to help my breathing, it is important for me to care for my inner spiritual health each day at Mass. I need the nourishment that the Eucharist gives to me.

When I got home after Mass, Naïve came running up to me and said, “Good morning, Dad.” She followed me into my office. While I was checking e-mails, she was seated at the table next to me. She pointed to the DVD of Annie. I said OK. Naïve never saw or used a computer before coming to Santa Chiara. She went to school only for a short time when she was young. She can’t read or write. She is struggling in our little school. Yet, after watching me use the computer only a few times, she opened the spare computer and pressed the power button. She then pressed the right button to open the disk tray, and patiently waited for me to insert the Annie DVD. Hopefully, tomorrow will be a better day for Bency, Naïve, Judeline, Tamysha, Peter Francis and all the kids in our care.

Yesterday morning, Billy and brought Peter Francis for his follow-up visit with Dr. Rachel. We also brought Billy’s son, Zachary, who had a fever the night before and kept Billy up most of the night. (Zachary is now ten months old and is eager to walk.) We took two staff members, Josette and Thelicia, with to hold the babies. Naïve came along for the ride.

We arrived at the doctor’s office at 9:30am. We usually like being there before they open at 9:00am. But the doctor did not arrive until 10:20am. There were three other kids ahead of us. The doctor saw us just after 11:00am. Seeing as Dr. Rachel never charges us, we did not mind the long wait. At one point while we were in the waiting area, I feel asleep. Everyone, especially Naïve, thought that was very funning.

The doctor said Peter Francis is doing good and is gaining weight. She prescribed some medication for both Peter Francis and Zachary. We told her the highlights of Naïve’s story. She said, “Thank you for helping some of the kids in Haiti. You are doing a wonderful service.” With a crowded waiting room of sick kid, she took her time with our two kids…and treated them for free. We are truly blessing to have such a good doctor willing to help us.

After leaving Dr. Rachel’s we went to the Caribbean Market Pharmacy to pick up the medication and to get a coffee. (OK…we went for the coffee and picked up the medicine.) Josette and Thelicia enjoyed the treat. Naïve picked out a pecan croissant. After taking a nibble, she pushed it away. I asked what was wrong. She said it was too sweet. So, she and I had to get back on the line and order something else. She picked out a cupcake with a ton of icing. She took three small bites then motioned that she wanted to put the rest back in the bag and take it home. When I asked why, she said she wanted to share it with Bency. Naïve is a genuinely good kid, who seems on the surface not to be too badly damaged from the hardships of her youth. 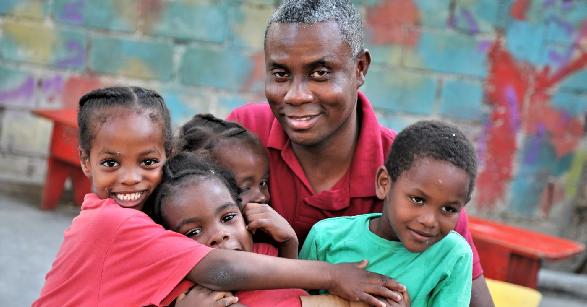 The Sun Will Come Up Tomorrow…Hopefully

Death, Resignations, and a French Scandal